Jazz is the musical form developed by the West African slaves shipped to the America to work on cotton or coffee plantations.
During the hardness of the labours on the ships or in the fields, this spontaneous way of singing represented a relief for the black slaves.
With the abolition of the slavery, jazz become a major classic genre which developed in New Orleans with new jazz band.
This music expressed in America a break away from the traditional one because of its strong rhythm and improvisation.
In 1920’s America, known as “the Jazz Age” or “the Golden Twenties, everybody seemed to have money but they didn’t.
The country was going through one of the most paintfull period which leaded to the Wall Street crash in October 1929.
In that atmosphere, Fitzgerald located the Great Gatsby (1925) were hospitality ad prodigality where indispensible to the society of that period in order to forget the social troubles and economical risks.
Marvellous and brilliant parties, crazy things and continuous dancing were done.
The soundtrack was always jazz music and the guests danced accompanied by a typical jazz orchestra consisting of oboes, trombones, saxophones, viols, cornets and piccolos, low and high drums.
A particular dance of Gatsby’s parties was the Charleston, a fashion dance which belong to the period.
In 1920’s and 30’s George Gershwin composed the famous “Rhapsody in Blue” for piano and jazz band and among Gershwin’s male performers was the black jazz trumpetist Louis Armstrong.
But the major figure in the story of jazz was another black man, Duke Ellington. 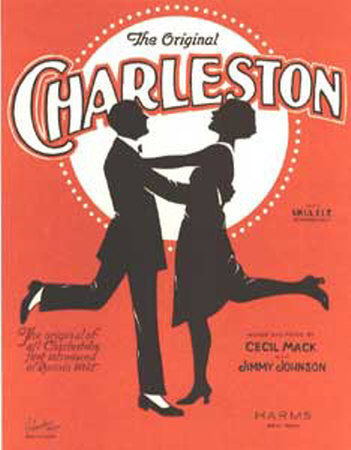